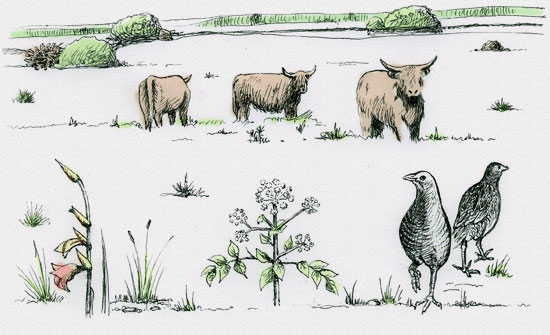 The nature park "Dviete water-meadows" is situated in the south-east of Latvia, on the left bank of the Daugava River in Augšzeme. The park was established in 2004 in a square area of 4989 ha with an aim to preserve the natural water-meadows.

The nature park "Dviete water-meadows" is one of the largest and best preserved examples of the natural water-meadows in Latvia and Europe. It is a world-scale unique flocking and nesting place for migratory birds where rare, natural and nearly unspoilt water-grasslands serve as a home to a number of rare and protected species of plants and animals in Latvia and Europe.

12 protected plants and animal species have been discovered on the park’s territory, along with more than 40 bird species regarded as especially protected in Latvia and the EU, and seven biotopes under protection in Europe and two in Latvia.

The whole territory is divided into two sections – the restricted area and the natural park. The territory contains the amplest water-meadows of the Daugava River. With the Daugava flood waters entering the ancient valley of Dviete, the water level in the lower reaches of Dviete in springtime can exceed the level of low-water period by more than 6 meters. During particularly high flood-time the waters from Daugava River fill up the Dviete valley for a stretch of over 20 km.

Dviete natural park belongs to the EU network of protected natural areas Natura 2000. The park has been granted the status of particular importance for birds, as it corresponds to the respective criteria not only on the EU level but also globally. The natural park "Dviete water-meadows" is an internationally important gathering place for spring-time migratory birds and an important nesting place for water-birds. The park’s area corresponds to the international criteria of wetlands as set out in the Ramsar Convention.

Dviete water-meadows are most astonishing during the spring floods when the waters from the Daugava River cover the ancient Dviete valley for up to 20 km. Then it is occupied by thousands of migrating water-birds, with impressively huge flocks of bean geese and white-fronted geese, swans, all kinds of ducks and waders. The park is a rich hunting-ground for various birds of prey – the little eagle, sometimes the sea- and fish eagle. Although for the bird-watchers the Dviete water-meadows are most interesting during spring floods, the picturesque county of Augšzeme offers much to see and experience in other seasons of the year as well. In the wake of heavy rain periods the flood-lands occasionally overflow in summer or autumn, whereas rapid thaws after especially snowy winters may cause flood as early as in January or February.

In summer the vast water-meadows and both of their lakes are an ideal nesting place for such protected bird species as the corn-crake, the snipe and the little crake. One can hear hordes of river- and osier white-throats, nightingales, jacksnipes, sometimes also quails and partridges. The water-meadows serve as the feeding ground for little eagles and some black storks; the lakes are favoured by swans, white-wing and black terns, and different kinds of hen-harriers. The surrounding forests abound in a variety of woodpeckers.

In autumn the Augšzeme highland becomes astoundingly rich in colour. One can catch a glimpse of the white heron and, of course, the grey heron, as well as view large flocks of cranes and white storks. It is also possible to observe the migration of geese, however, the autumn migration of birds is usually dispersed and not concentrated in one place. Although winter is a relatively silent period it is still possible to see a variety of woodpeckers, partridges and an occasional bird of prey. In 2009 the park acquired a bird-watching tower.

The natural park "Dviete water-meadows" has an information centre which provides data about the natural, cultural and historical riches of the ancient Dviete valley and the overall management of the park. Other services include guided tours, consultancy on excursion routes and educational seminars. The information centre holds environmental classes where primary school pupils and their teachers are encouraged to explore the nature and the historical development of the Dviete flood-lands. Since 2006 the natural park "Dviete water-meadows" has been keeping the Konik Polski wild horses and some cattle of the Highlander breed.

They are good "managers” of the meadows. Letting herbivores pasture on the natural water-meadows is an important measure to preserve natural diversity since the damp and hummocky meadows which used to be mown by hand are close to unsuitable for mechanical upkeep. Gradually they become overgrown, leaving less space for the habitat of plants and animals. The principal task of the herbivores is to prevent the water-meadows from overgrowing and to keep them bare for better exploration of the wildlife by nature-observers. The herbivores are kept in the pastures all year round. Being unfastidious, they subsist on grass, shrub sprouts and early reeds in summer while munching on last-year grass remnants, twigs and bark in winter.

During particularly harsh winters the cattle is fed with hay. The cattle is crossbred in order to preserve the genes of historically Latvian breeds, to adapt the species to local conditions and to enhance the hardiness and frugality of the aurochs. To date the natural park contains enclosed pastures of 180 ha, comprised of 100ha on the Bird Island (Putnu sala) enclosure and 80ha on the Zariņi Island. The expansion of natural pasture areas must continue as it will help restore and maintain the natural water-meadows. 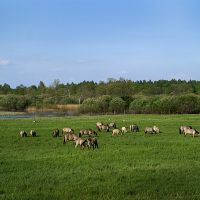 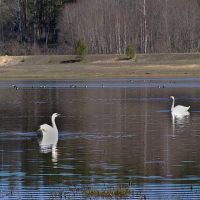 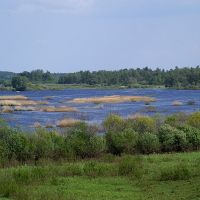